Chineham Park Running Club (CPRC) was established in the summer of 2009 by a small group of locally-based runners that met following the introduction of a fitness class at the Fitness First Gym, Chineham Business Park, Basingstoke.

Through the enthusiasm and commitment of its original founding members, the club has rapidly grown in numbers resulting in the introduction of a formalised structured clubnight training and race programme. This was soon followed by the adoption of the club’s unique running vest and acquiring membership of England Athletics in July of 2012 (Affiliation No:7692269). The club has a growing active membership of over 90 men and women of mixed ages and abilities.

The Club’s main aims are to encourage and promote the development of individual running fitness to members of mixed abilities that are of 18 years and above; in a safe, supportive and friendly training environment.

Members of the Club regularly take part in local and national running events/road races including Basingstoke parkrun, 10km, 10mile,half marathon, full and ultra-marathon distances. Group members are currently training towards building their running fitness to take part in the 2013 Basingstoke Half Marathon, 2014 Brighton, Virgin London and Snowdonia Marathons; for the fun of the challenge and to raise money for charity.

In March of 2013, the club was represented at the prestigious Basingstoke Sports Awards and was a finalist in the ‘Club of the Year’ category.

The club evening or ‘clubnight’ is held every Wednesday at 7pm at the Basingstoke Fitness First Gym, Stag Oak Lane, Chineham Business Park, Basingstoke. Club evenings include regular paced-group road and trail runs, time trials, sprints, intervals, hills and fartlek (speed-play) sessions. All the training that runners should be doing to increase speed, strength and endurance, but don’t like to do alone! From time to time (including some weekends) we also use a variety of other venues in the Basingstoke area so that we can introduce more challenging sessions, so please see our training page for more details.

New members are first invited to attend a coached session where they undertake a short health check and are introduced to the other members of the club. Membership of the club costs £60 per year and is paid on annual basis in January (this includes registration with England Athletics)

Access to exclusive club kit
Social events, including car-sharing to running events
Exclusive club discounts available from local running shops
The opportunity to be entered into the club ballot for a race entry for the Virgin London Marathon

If you would like to join CPRC please download and read of our joining pack, which includes a membership form (at the top of this page), and then contact us via email to first arrange for a suitable time to attend.

It’s been a very busy time for CPRC recently, lot’s of running along with a few Triathlons. Rohan, Chrissi and James, recently represented the club in the Winchester May Day Tri. They had a fantastic day representing the club in what is fast becoming a very popular extension to some runners routines. There were a choice of distances to take part in, a 200m or 400m swim, a 12km or 24km bike ride followed by a 2km or 4km run.

The club also had members participating in the Alton 10 mile road race, Sarsen Half Marathon, The Virgin London Marathon and The Brighton Marathon.

For Richard it was his first ever marathon and for Nikki and Paula it was the end of a very tough week as they both did back-to-back marathons having both successfully completed the Brighton Marathon the weekend before London.

The club are also delighted that Nikki and Richard chose to raise money for St Michael’s Hospice in Basingstoke.

A charity-giving website page was set up, to which the club are kindly asking for members, their families and friends to show their support and make a donation to St Michael’s Hospice http://www.justgiving.com/CPRC.

Please give generously, as the money you donate will help provide valuable care and treatment in helping people affected by life-limiting illness. 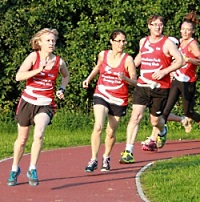